Here are a few of the dogs who have found their ‘furever’ homes.

If you are interested in adopting a dog from Adopt-a-Bull Terrier Rescue please fill in the Adoption Form and contact one of the team using the Contact The Rescue Form. 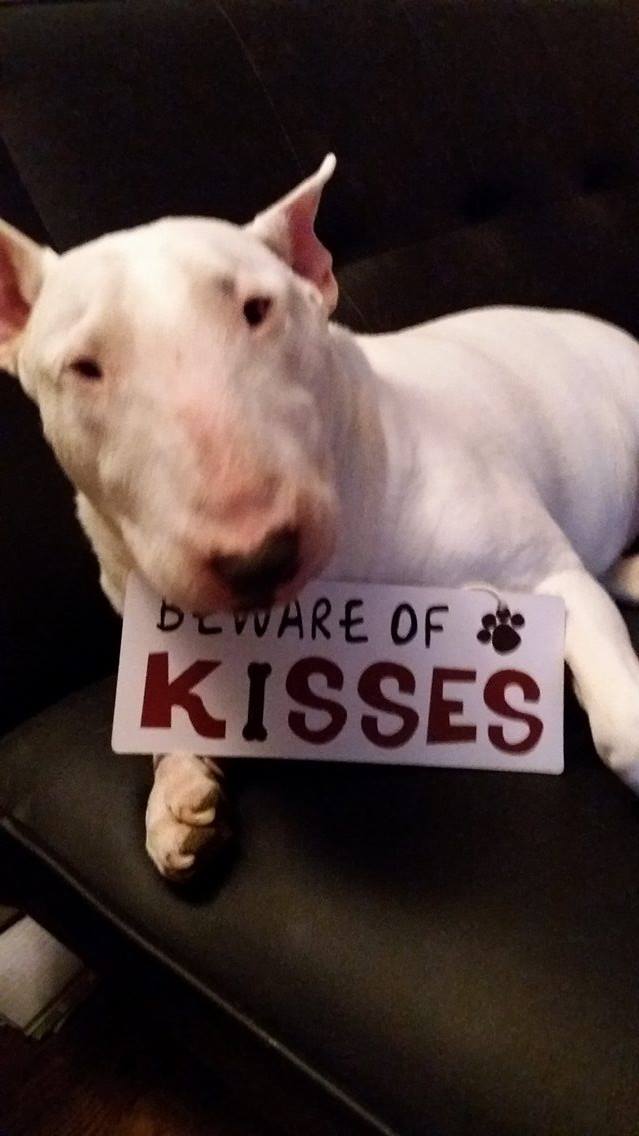 Little write up on my boy Vinnie.
In 2013 we lost one of our furbabies to Lymphoma and our other rescue bullie, Sophie, missed her so much she actually got depressed; So we decided to foster for Adopt a bull.The dog we fostered really did not like sharing our attention with another dog so sadly we had to arrange for her to go to a new foster home. Then we saw that Vinnie needed a new fur ever home due to a change in his owners circumstances and we fell in love the minute we saw his picture. Vinnie is deaf and has a missing hind leg due to a car accident when he was just a pup but that made him more special in our eyes. 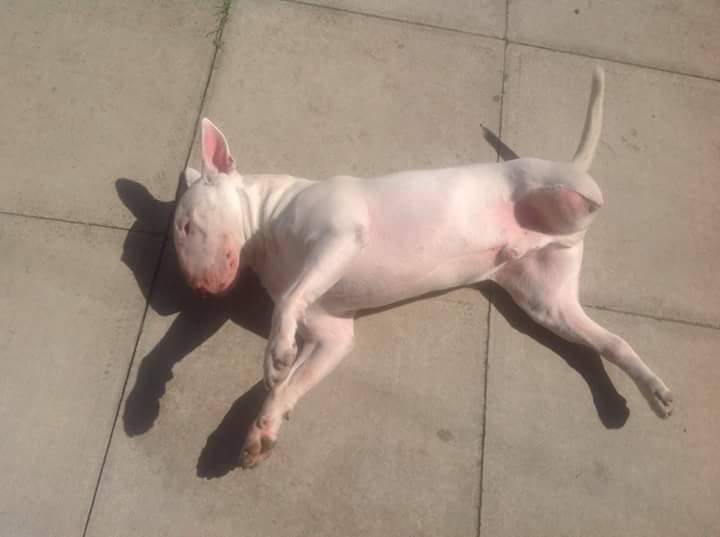 Vinnie had lived with another dog so we knew he would be fine with our Sophie. We set off to collect him from Jayne and Brian and and completed the adoption paperwork and as soon as we brought him home it was like he had always been here.
Now nearly 4 years later him and Sophie spend their days cuddling up or running round causing havoc with their Bullie runs. 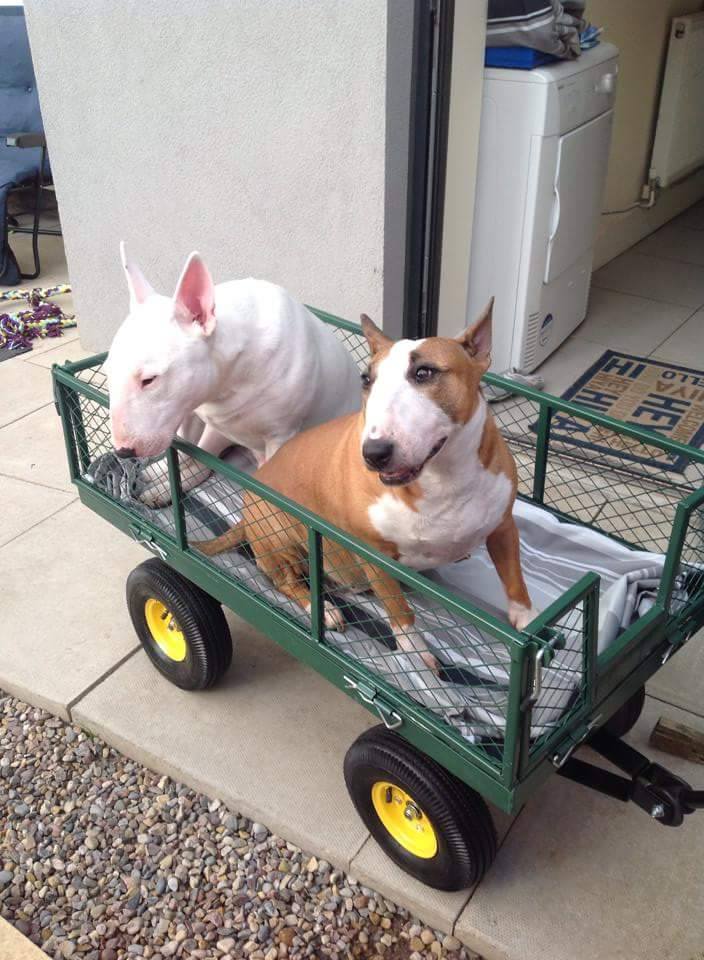 Vinnie is a mummies boy but I have to admit he loves his human sister a little more. He adores children and is happiest when we have little humans over to visit. He loves the beach and will sit down in the sea and let the waves wash over him. He also loves to sit at the gate and watch people pass by and will bark at them if they don’t say hi. 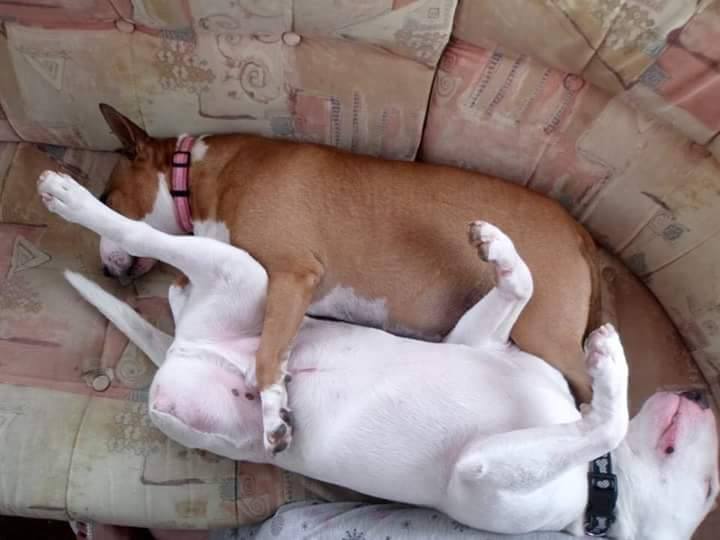 Both him and his fur sister Sophie struggle with long walks so we bought them a cart and when they start to get tired they happily sit in it together and get pulled along enjoying all the fuss they get from passers by.

To say our lives changed the day Vinnie came to join us is an understatement, he is demanding, needy and has to be touching you at every opportunity but we would not want him any other way. 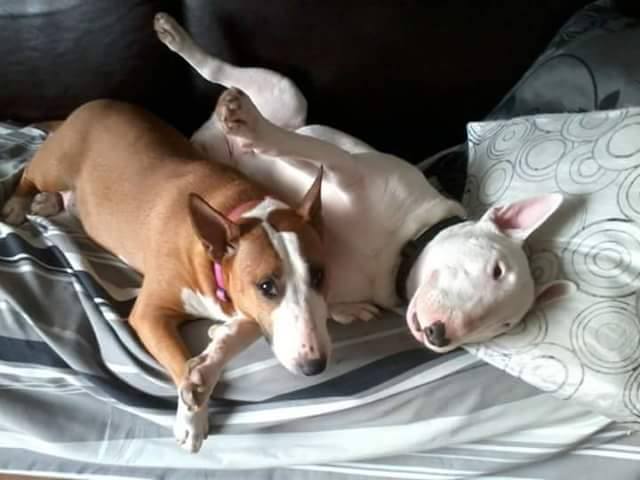 Vinnie and Sophie mean so much to us they were included in our Wedding day last year and had ribbon matching the bridesmaids as collars and had a photoshoot with me. 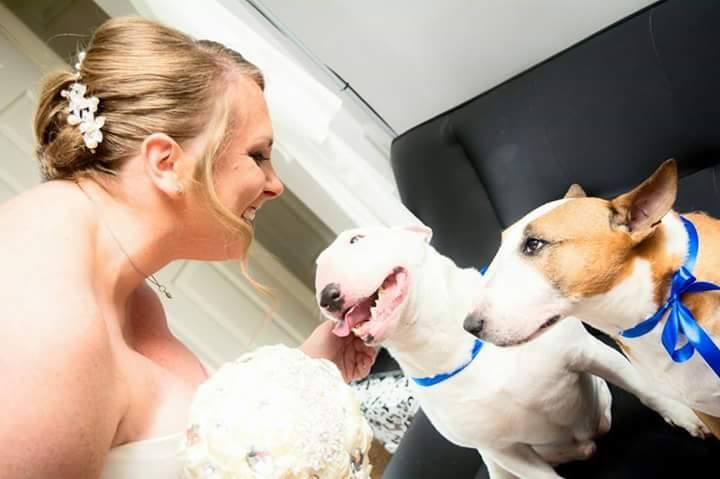 Thank you to all at Adopt-a-Bull for allowing us to adopt this amazing, funny, loving and very special boy. Xx 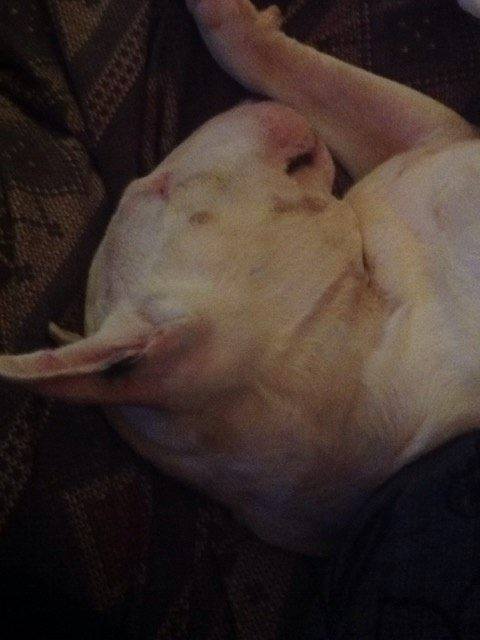 Handed in to rescue at the age of 11 having been discarded by a family who were his second owners. 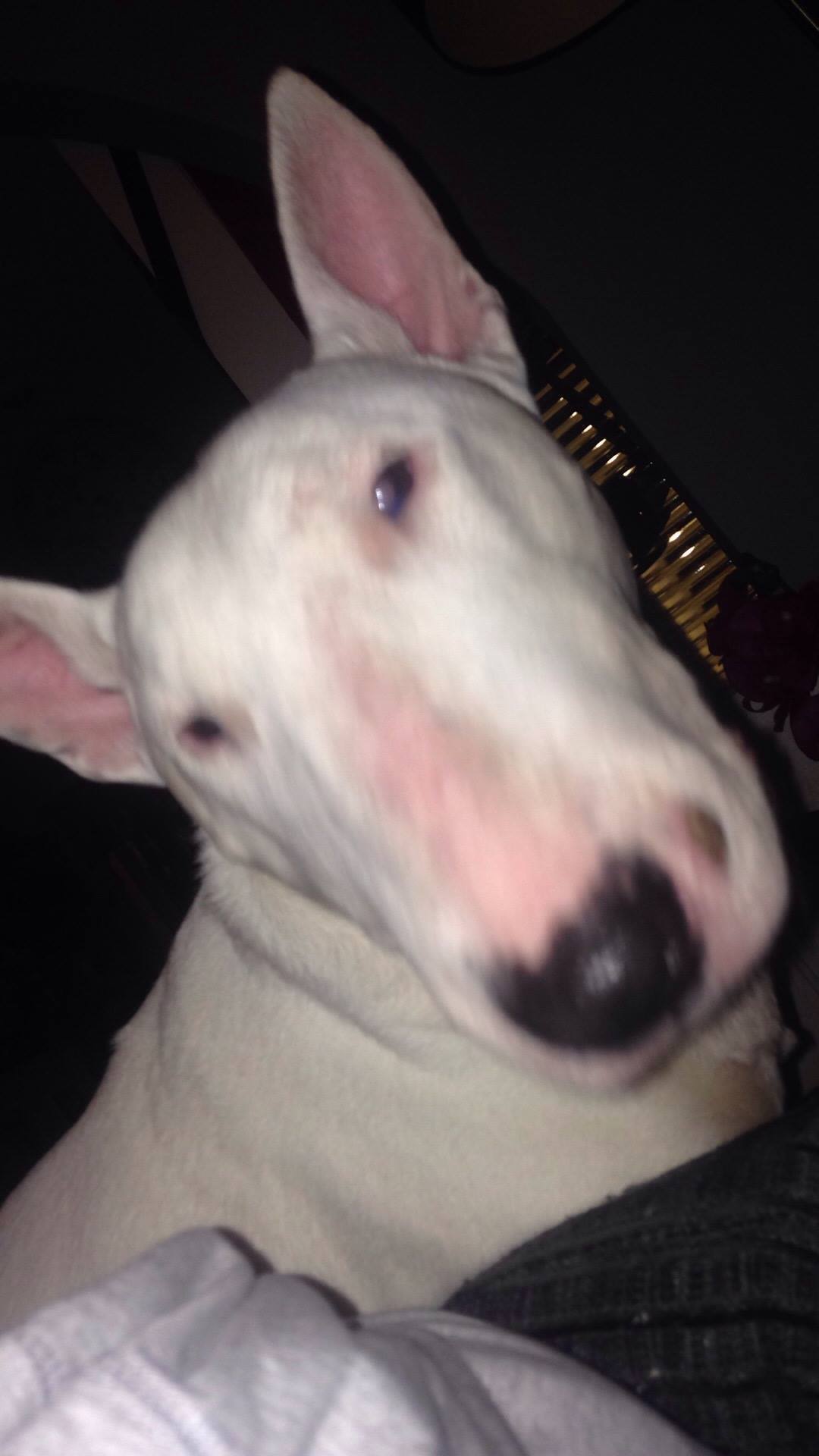 He took a couple of weeks to settle in, crying, barking and trying to hump my two staffies but he is another snugglebum who loves human and doggy company, car rides, walks, and stretching out on the sofa to snore his face off! 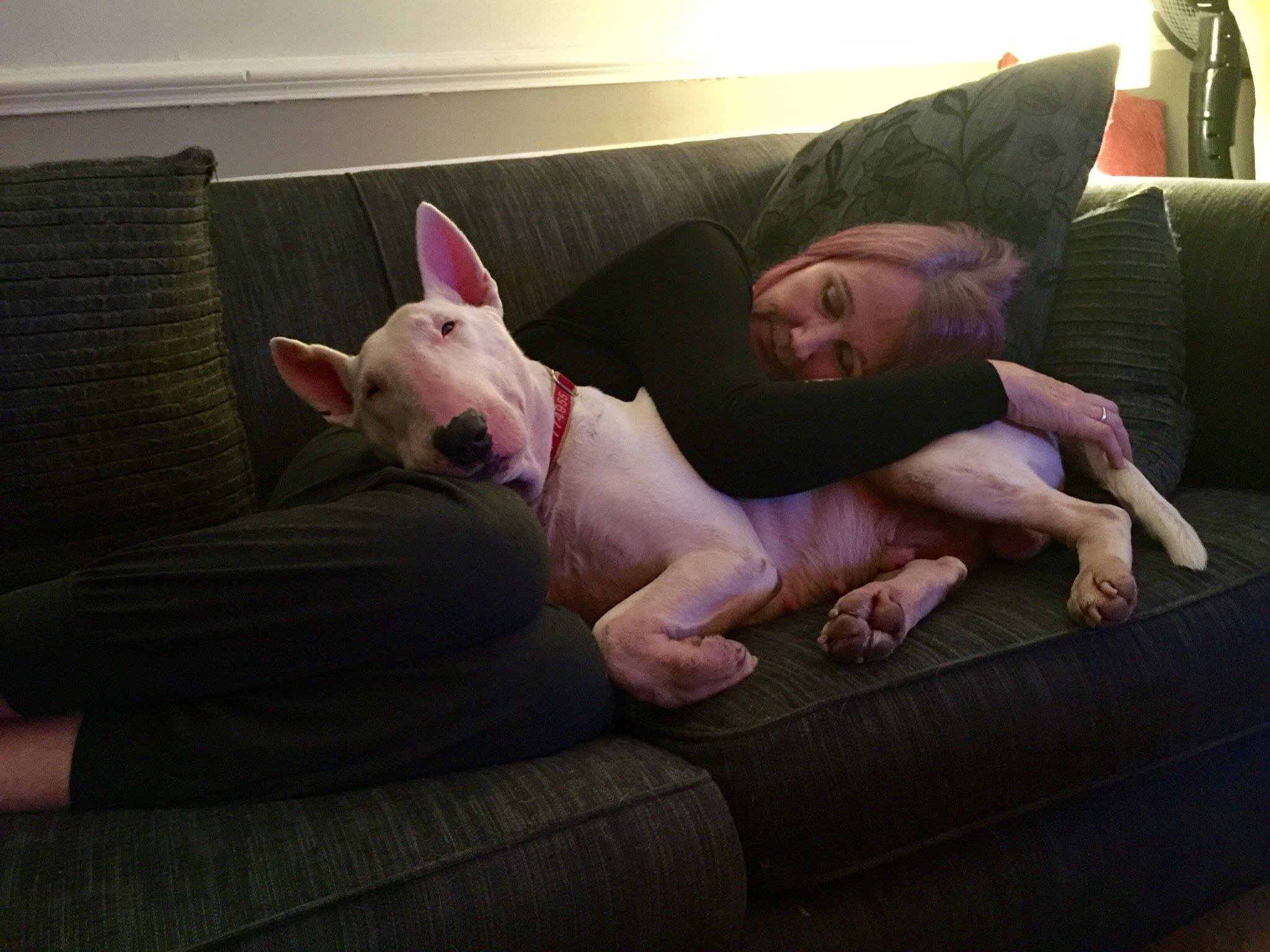 Bobby is deaf probably from birth, as are many white bull terriers, but this doesn’t impede him at all except for off lead walking and recall – but he watches and uses the help of new step siblings as a guide on sounds.
He is still very independent and a strong character, as all Bullies are! 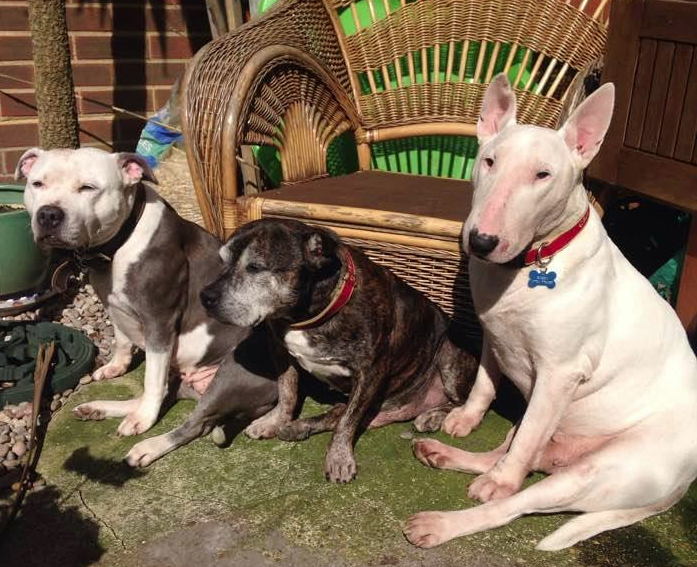 A little write up about our loveable rouge Sonny! 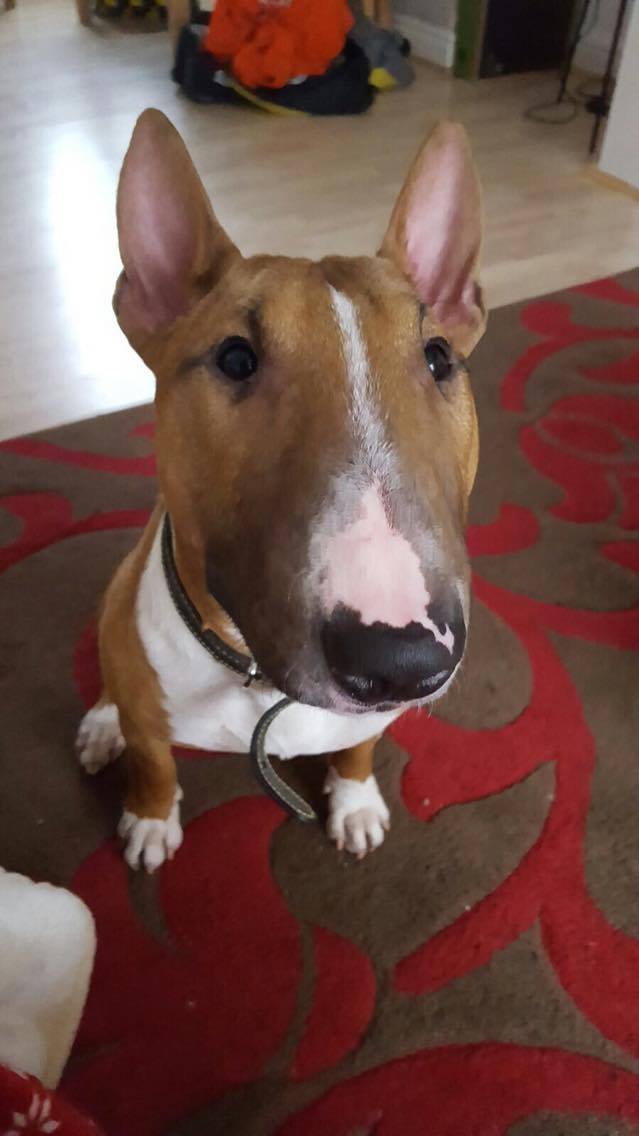 In our family there’s three of us, myself Ryan my partner Kirsty and our daughter Izzy who is 6.
In November we decided that we wanted another member to our family (a furry one) Kirsty wanted to get a puppy but I’m a big fan of rejoining a dog and giving it a loving forever home it’s missing, so we came to an agreement we would adopt. 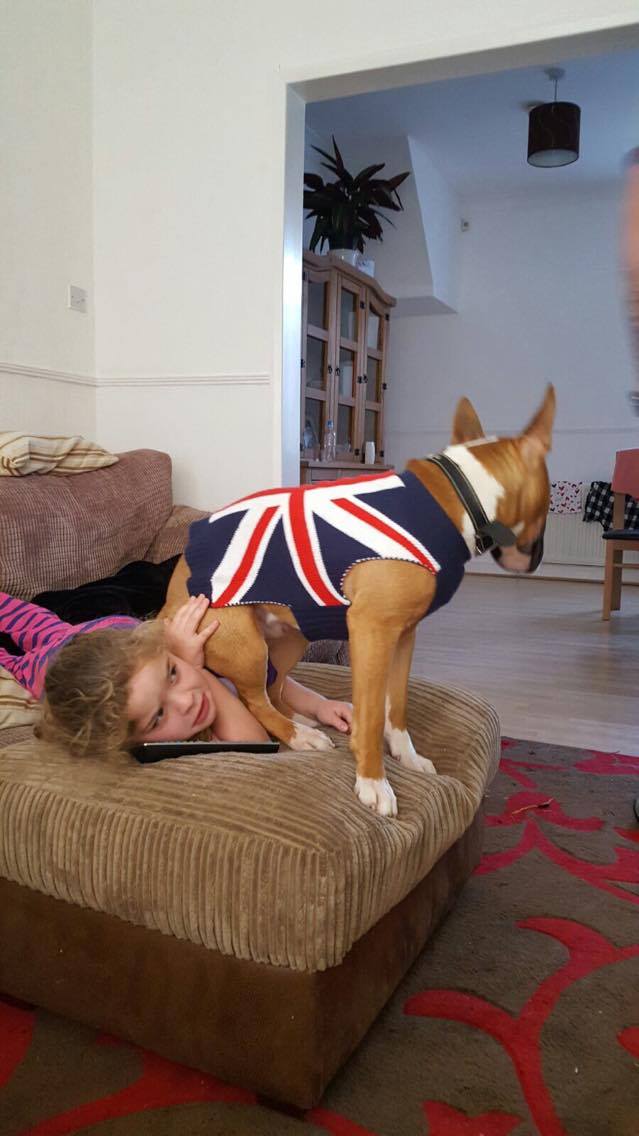 We spent weeks and weeks looking at dogs and everyone that would be suitable to join our family was already going to a new home, then a friend told us about adopt a bull, English bull terriers being my favourite breed I was over the moon. 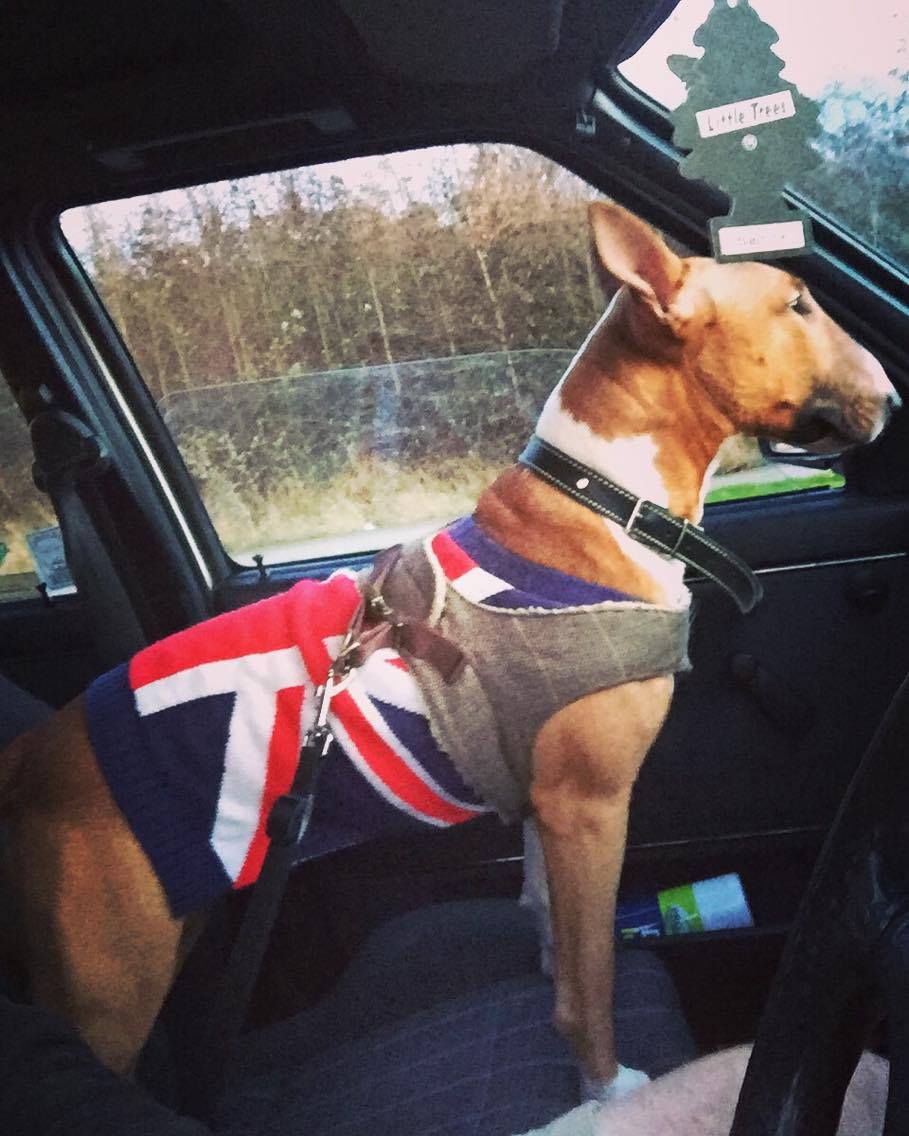 So we had a look and we saw Sonny and instantly fell in love with him! We got in touch and filled out the application and before we knew it Sally and Ciaron got in touch with us to arrange a home visit. 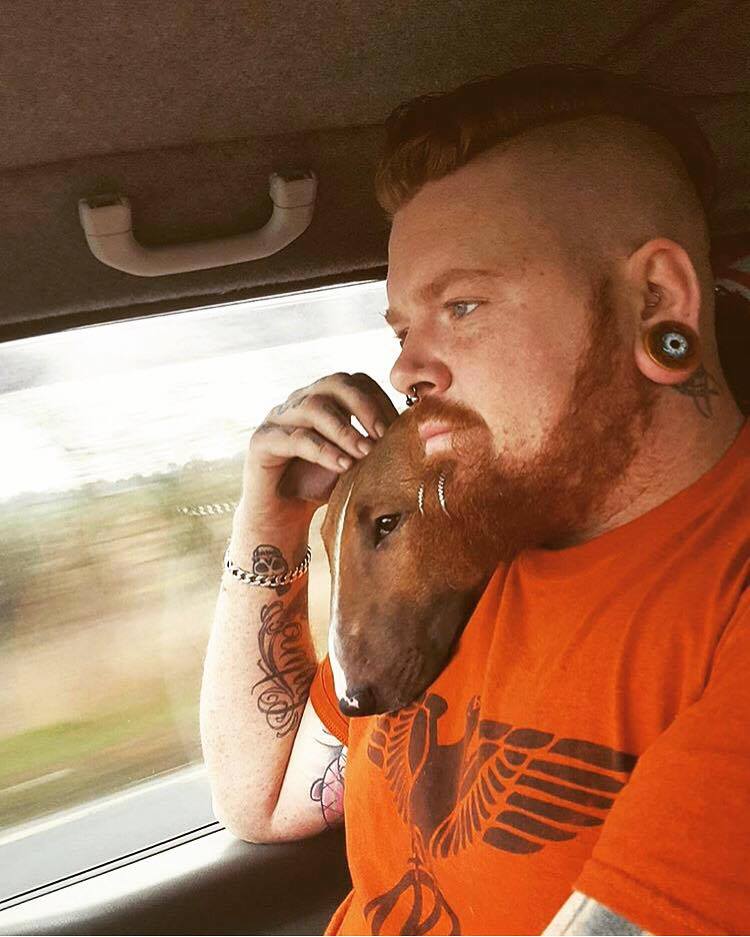 We were informed of Sonny’s past which was brilliant we then knew everything we needed to know, after the home visit we spent a few days chatting about it and decided to have Sonny on a trial period to not only see if it was the right choice for us but to see if Sonny was happy living with us! 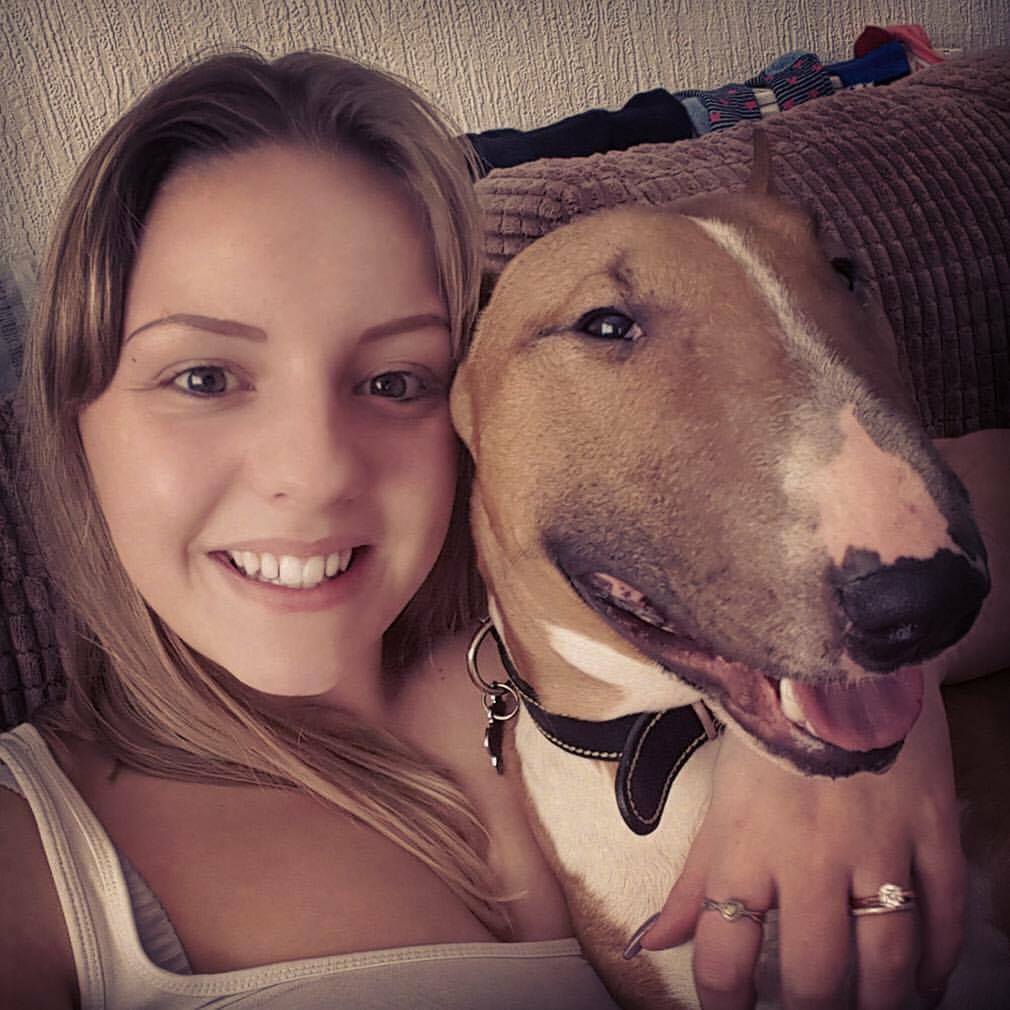 Everything went brilliantly, he was a typical 9/10 month old pup full of life and energy but also so loving!! 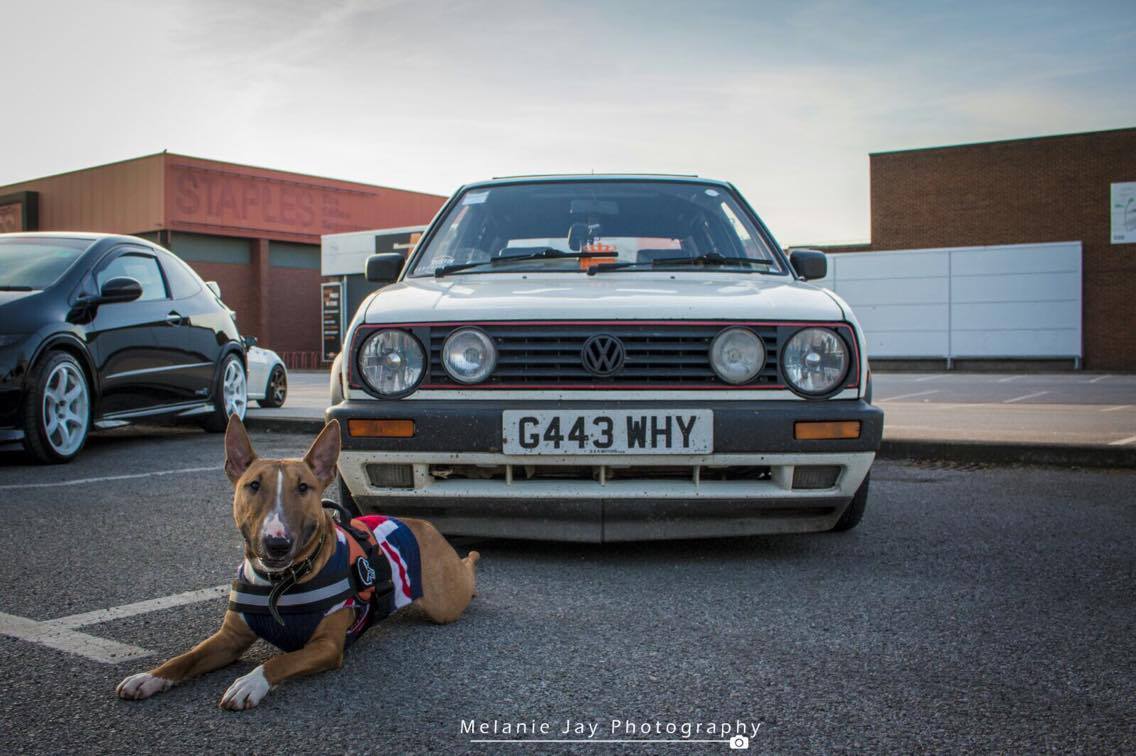 Since he came to us on the 27th of December he has come on so much with his training, he’s still a typical pup but we wouldn’t ask for him to be any other way!

He is so loving towards our daughter and keeps my partner company when I’m working away. 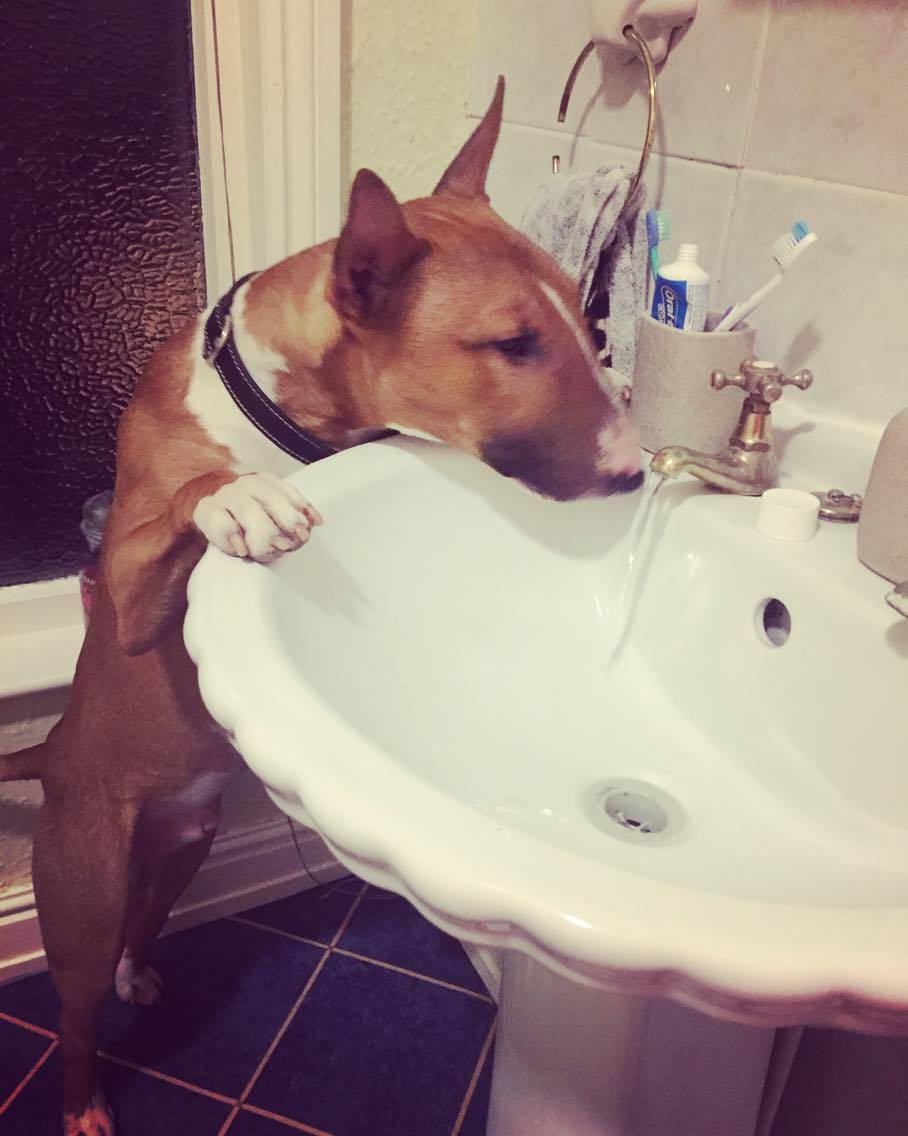 He is such a character and has filled the furry little hole we had in our family. Here’s to many years of fun, mischief and love from our boy Sonny. 🙂
– Ryan, Kirsty & Izzy, 2017 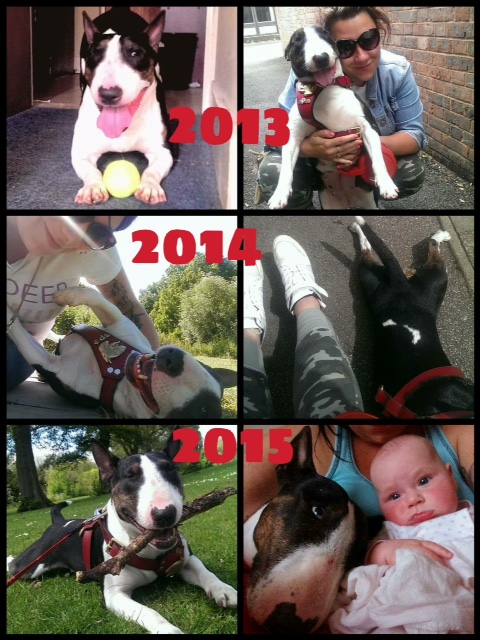 Here is the story of me adopting my best friend…
Peppa(previously Pippa) aka Tiny Temper, my miniature Bull Terrier.

In 2013 I lost my first bullie girl Jess (also a rescue). I thought it will take a long time to be able to open my heart to another furkid.

Then one day I saw a picture of Peppa posted by Nicole it was definitely love from the first sight, as I knew she must be mine from the minute I saw her.
I arranged with Nicole and Jackie to go and pick Peppa up in August 2013.

I have to say that saying that a miniature bull terrier is hyper is an understatement. Although she needed a lot of training and patience, I wouldn’t change her for anything.
She has been with me through the worst time in my life…and truly I believe that it was meant for me to find her so she could rescue me.

Peppa is not only my “pet”, she is my best friend and literally my shadow. Last year I found out that I was pregnant, I wasn’t sure how she will react as she was approx 4/5 years old when I’ve adopted her and we didn’t have much of a background on her.
The reason why I’m mentioning this is that a lot of people believes that dogs, especially rescued are a “danger” to the new arrival and sadly they often get rid of a dog because baby us coming. Peppa has been fantastic during my pregnancy, protective over me and bump and when my daughter was born she become best nanny dog ever!
Living proof that every dog deserves a second chance.